Designed and Built in Australia

Imagine yourself being able to drive with your boat upright on your vehicle, with all your gear loaded and ready to go fishing at anytime…
Well it’s here! 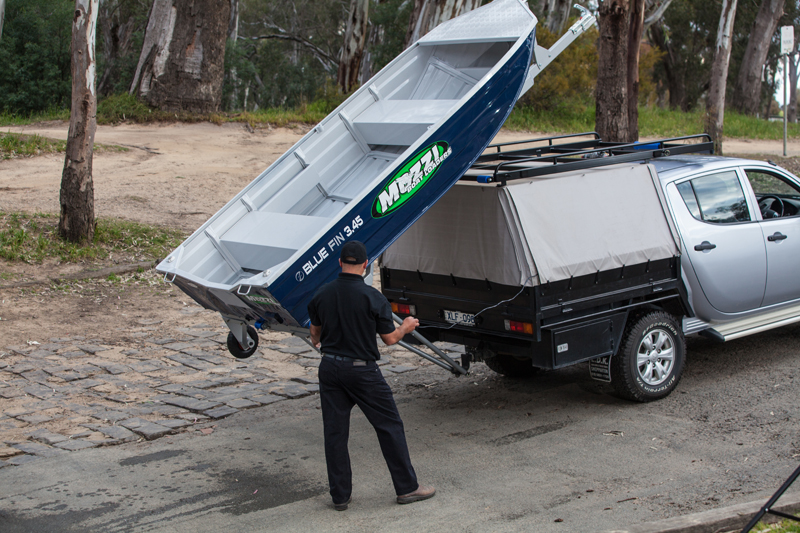 The best boat loader on the market… 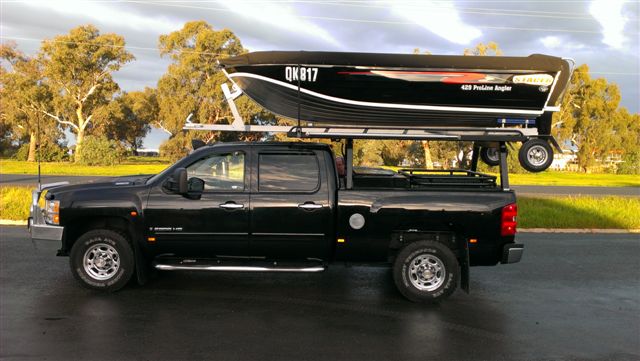 …Designed for your road

The Mozzi boat loader is an Australian made product.

With Patent pending, each Mozzi Boat Loader is custom built in Echuca, Victoria, and are designed for the Australian terrain. We have created a boat loader that makes caravan touring with a boat as easy as possible, so you can see this country by road, and by boat.

The Mozzi is a boat loader, that comes complete with a universal rack, a road registerable trailer which is complete and doesn’t need to be assembled, a quality winch and loading arms, which all combined together creates the ultimate traveling companion. Bring your own boat to us, or we can design a package for your requirements.

It’s exactly what the grey nomad or caravan traveler has been waiting for! 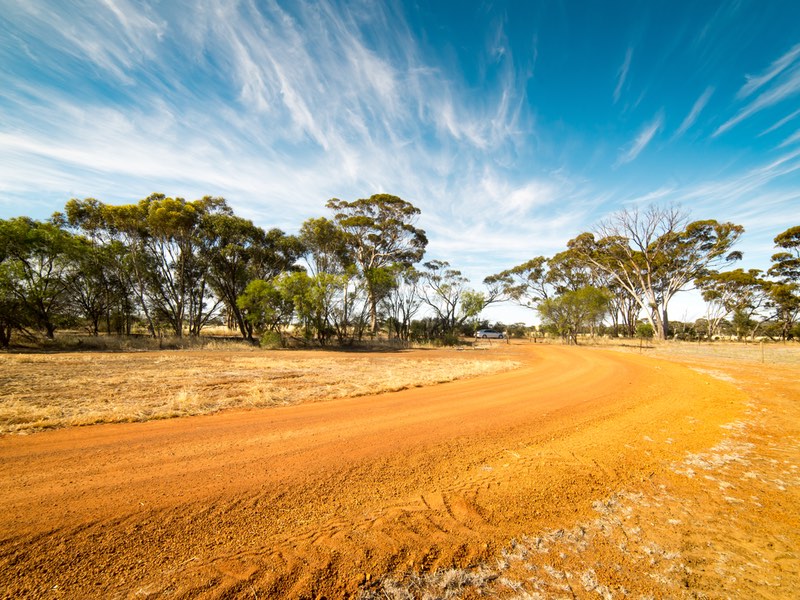 About the Boat Loader

The Mozzi Boat Loader is designed to make traveling with a boat as easy as possible. Our standard model will carry boats up to 1500mm wide and 3750mm long. We build the rack and trailer in Australia using high grade aluminium to keep it strong and lightweight. The trailer comes with VIN # and build plate so it can be registered for the Australian Roads. 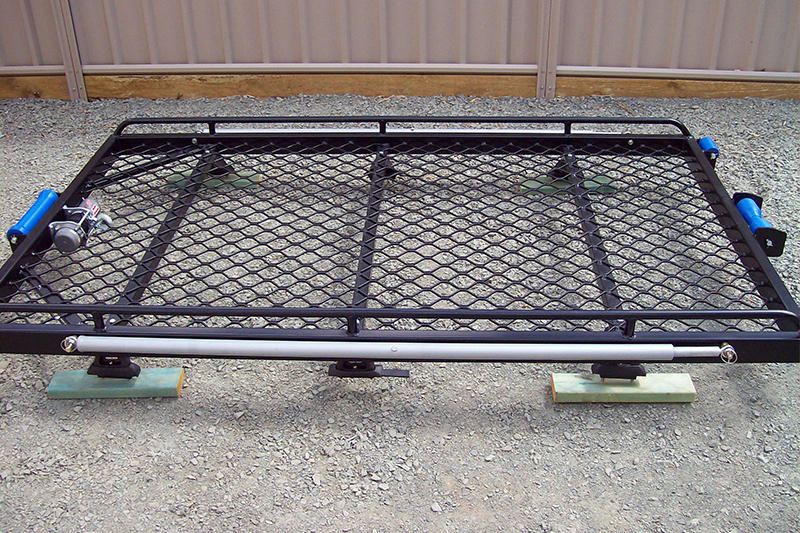 The racks for a Landcruiser and Patrol wagons are also built of high grade aluminium and have a mesh floor to use when not carrying your boat. They come with an PV2500 remote WARN Winch and synthetic rope.

Racks for Dual Cabs and Utes are built from steel and also make a strong usable rack when not carrying a boat. They come with an PV2500 remote WARN Winch and synthetic rope, (can be upgraded to a PV3500 at customers request).

The rear loaders are also built of lightweight aluminium. They are telescopic and clip on and off with ease using locking pins. The racks come with mounting points on the side to store them out of the way while travelling.

The aluminium roof rack and boat trailer for the average boat weigh just 90kgs after the wheels are removed.

When you have finished your travels just back the trailer into your shed and enjoy having a roof rack that is strong and very usable. 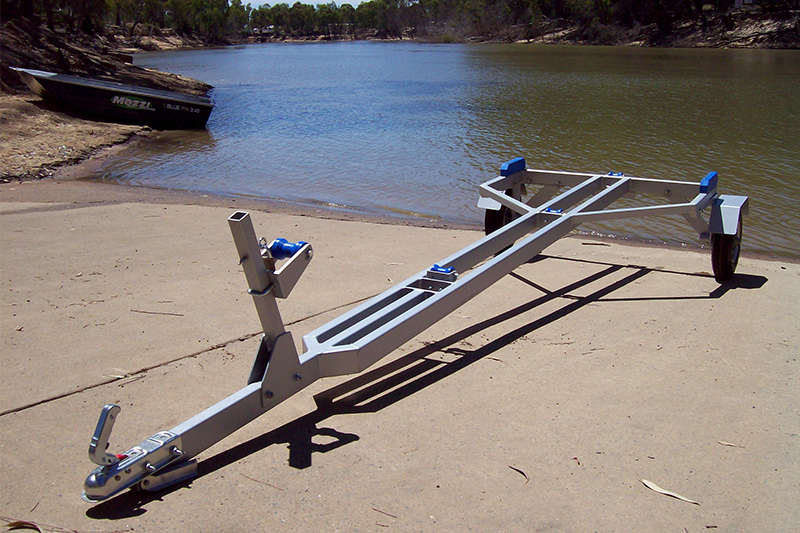 The system is fully patented and is the only product like it on the market. MOZZI BOAT LOADERS PTY LTD will also custom design to suit your needs, (depending on vehicle type and boat size).

Features of the Mozzi Boat Loader

The system is fully patented and is the only product like it on the market. MOZZI BOAT LOADERS PTY LTD will also custom design to suit your needs, (depending on vehicle type and boat size). 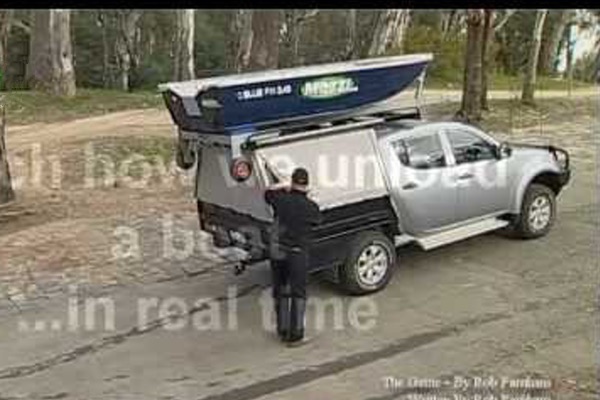 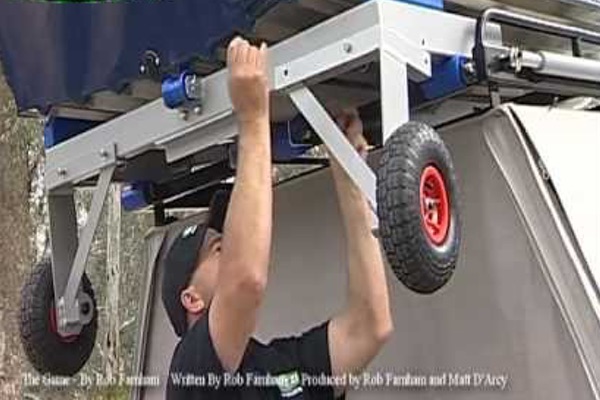 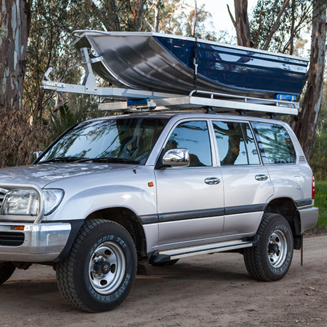 Item consists of the following: 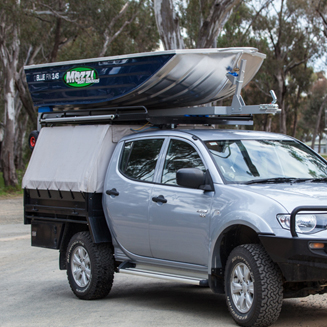 Item consists of the following:

Pictured but not included are as follows:
Take a look to our gallery 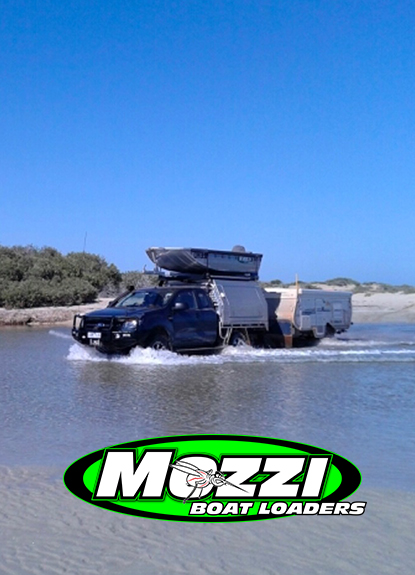 How will the loader and boat affect my fuel economy?

As with anything you carry on your roof it will affect your fuel economy, however, because the boat is the right way up you will have a better fuel efficiency than if your boat was upside down. This is because the wind disperses on either side of the boat, just like it does when in the water, compared to the wind catching and being locked underneath the boat upside down creating an uplift force.

Can I keep my boat motor on my boat while driving?

Most utes can be set up to keep their motor on while driving. Wagons however are restricted to their roof load capacities.

Can I use my own winch?

No, the whole unit is designed to work together in a safe manner and to handle the load. We can not guarantee our system if you decide to change the design in any way.

Do you sell the Blue Fin boats as well?

Yes we sell the Blue Fin Trekker range, 2.95m to 4.30m as a package deal with our loaders.

Does the Boat Loader and Trailer come with the rack?

What is the maximum boat weight the unit can hold?

The aluminium system (designed for wagons) can handle boats and gear up to 200kg’s. Utes, however, can handle the extra weight. So we design our system with a steel rack, giving the weight capacity of 250kg.

What size boat can I have?

Our standard loader is designed to withstand a 3.75m boat in length for a dual cab ute. We can modify this system however depending on the capacity on your vehicle. For example, we can fit a 4.30m boat on a F150 or Chev ute. Wagons are restricted to their vehicle roof load capacities but normally a wagon can hold up a boat of 3.8m.

Can all wagons hold your system?

Our clients love us!

Hi Rod, Just letting you know that we arrived Karumba last Saturday. The boat loader went fantastic, and a lot of interest was shown along the way and also at Karumba. You may be interested to know that a number of people have seen the loader in advertising or on the net, but were interested in actually seeing it live. All works well, and I use the winch to load it on the trailer at the ramp – works a treat. I attached a photo of my Landcruiser caravan and loader for you. By the way, managing to catch a few good Barra at the moment. Thanks again. 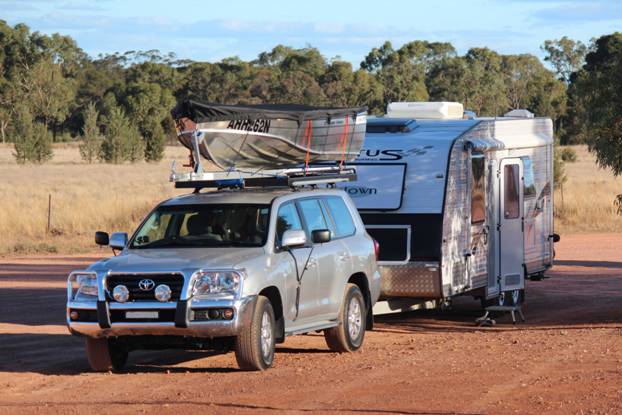 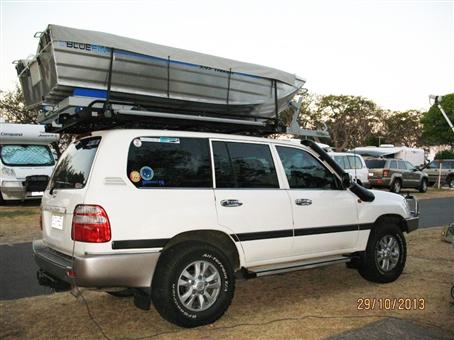 G’day Rod,
Finally back home after having the gear fitted, all works very well and I’m very happy with it.

I have had the boat on and off quite a few times to get the hang of it, was at Miara (pronounced “Myra”) caravan park, (just north of Bundaberg on the coast) had a big audience when I off loaded, was asked to load and unload a couple of times and all went well,. I have had a lot of comments about the system, all good, and about the engineering, also from a lot of “older” blokes who have conventional loaders, the inverted boat ones, said the quality of the workmanship is first class, I totally agree.

Barney, Maria and the guys at Barney’s Marine were the best, very very helpful. Matt who went out of his way to help, he wired the Cruiser as well, nothing was to much trouble for them, you have a top agent there. I took some of your brochures and have handed a few out, both at the van park in Hervey Bay and Miara, wrote your name on them and told them where I had it fitted, so hopefully you get a call or 3 in the future, there were a few very interested.

I’m getting a bracket/carrier made for the rear of the caravan to carry the wheels, should look good when finished, will send a pic of that when done.

Better get and do a bit, thanks again for a top machine. 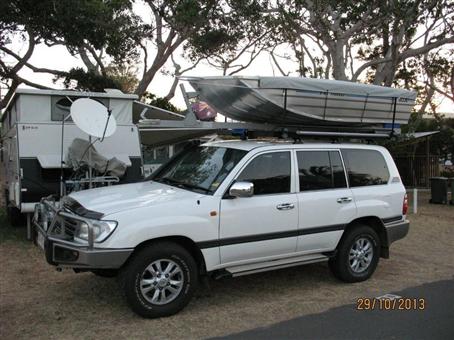 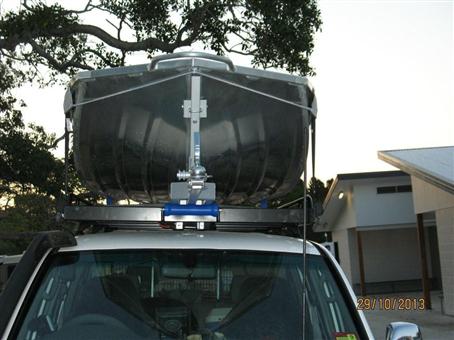 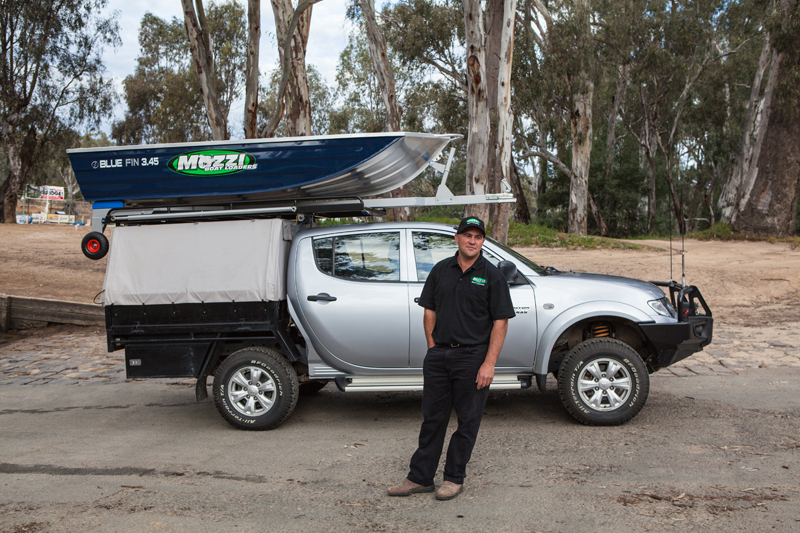